Hey folks, please be careful out there when you are working outdoor shows. The wind is a wicked and powerful foe. It can pick-up tents, topple towers, and generally wreck havoc. The latest report is somewhat belated as it occurred July 18th, just one day after the Madonna concert canopy rig fell in France. This time it was at an outdoor concert in Guangzhou, China.


There are several videos out on YouTube that show a very shaky cell-phone cam of the show. At one point the camera pans toward stage left and shows a large scaffolding-type lighting tower with some line array speakers also hanging from it. Later in the video there is much confusion and yelling with a few shots of the collapsed scaffolding and several people climbing through it.

Not surprisingly, there is VERY LITTLE media coverage of this and virtually no acknowledgement of anything by the promoter or sponsors. Some news articles say the cellphone video shows the I-Mag video screen falling forward toward the audience, but that is not what this writer sees. The cause of the scaffolding collapse may be related to an incoming hurricane (cyclone) and large tarps tied to the scaffolding acting like windsails.

This is not much different than what happened in 1990 in Brooklyn, New York at the Martin Luther King Music Festival at Wingate Field. Curtis Mayfield was paralyzed from the neck down in an onstage accident after high winds cause a 600 pound lighting rig to fall on him during an outdoor concert. Eyewitnesses described the moment as “A small twister of some sort tornado-like, just came out of nowhere.” He was 48 years of age at the time of the accident. Curtis Mayfield was best known as the lead singer for The Impressions and for composing the soundtrack to the blaxploitation film “Superfly.” Fortunately he was able to write, produce, sing, and record while lying on his back, but sadly was unable to play the guitar anymore. 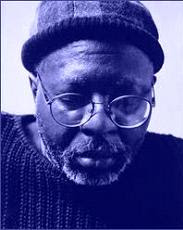 Unrelated to either of these events are also numerous report over the years of stage canopies, tents, and other concert paraphernalia being blown over by high winds. Everytime these events happen there is always someone that is quoted in the media as saying "We never thought that this could happen . . . blah, blah, blah."

It's time to wake-up out there! It can happen! It does happen! It could happen to you! If you don't know the weather, your rig, and your loads, don't do the show. Today we have Doppler Radar, Internet real-time weather, and very accurate wind speed measuring devices. Install them, use them, monitor them continuously like your life depends upon it. It does.
Posted by Unknown at 7:59 PM No comments: 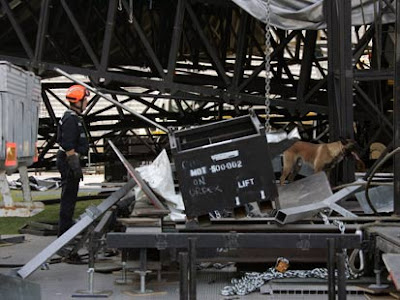 During the set-up of a 60 ton (120,000 pound) stage canopy for her “Sticky and Sweet” world tour, one of four the cranes lifting the canopy into place failed and the canopy descended on several dozen stage workers. Most were able to get out of the way before the canopy pulled-over one of the hoisting cranes killing one worker instantly. The other worker died later at the hospital after neuro-surgery.
According to French media reports, the roof of the stage, described as a “giant Meccano”, was being raised by four electric winches on metal columns at the corners of the stage when it collapsed. Early reports suggest that one of these columns, which were held up by cranes, collapsed, causing the roof to fall. Maurice Di Nocera, Marseille city councillor in charge of major events, said on France-Info radio that the roof had been about two-thirds complete and that it collapsed gradually on top of several workers. "Since it did not collapse right away, that allowed several people to get out, to avoid being hit," he said. Another report says that they are looking into an electrical failure on one of the winches. French officials have opened an investigation for manslaughter, and experts have started interviewing witnesses and studying the scene of the accident.
About 27 fire engines and 80 firefighters responded to the emergency when the stage collapsed at 5:15 PM (GMT). French newspaper La Provence, quoted a witness who said part of the stage was already built and the chain either released, or pillars supporting it were poorly attached, causing the roof to fall on the stage and lawn. The witness reported, "it fell like a house of cards."
"There were a lot of open fractures, of injuries, it was a messy sight," one of the rescue workers told Agence-France Presse. The disaster led to the immediate cancellation of Sunday’s planned sell-out performance
Charles Prow, 32, had been in intensive care in a neurosurgery ward in the port city of Marseille since the accident on Thursday, but he died of his injuries overnight.
A 53-year-old Frenchman, Charles Criscenzo, was killed on the spot when the giant structure collapsed during the set-up for the Sunday concert, which was cancelled in the wake of the disaster.

Eight other people were seriously hurt, including an American who was hospitalised in a life-threatening condition, while 36 people suffered minor injuries and shock.
The stage was one of two units being "leap-froged" along the tour route. The accident happened at the Stade Velodrome, France's second-biggest sports arena, that seats 60,000. 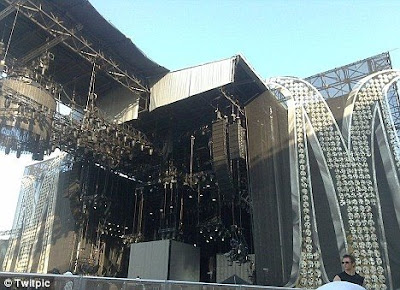 On Friday (July 17), online footage emerged of Madonna, 50, paying tribute to the felled workers during Thursday night's show at the Stadio Fiuli at Udine before she performed the song "You Must Love Me."
"Before I continue the show, I just wanted to take a moment to acknowledge and pay tribute to two people who lost their lives today," she told fans, holding back tears. "I don't know if you have heard. When they were building my show in Marseilles where we're playing next — we don't know why, but one of the cranes fell, a piece of the stage fell down. Two men lost their lives. It's a great tragedy to me. ... I feel so devastated to be in any way associated with anyone's suffering. ... Let's all just take a moment to say a prayer for Charles Criscenzo and for Charlie Prow, two men who lost their lives today. Our hearts go out to their families, to their loved ones. Please, let's all just take a moment to appreciate life in general.
Before performing "Ray of Light," the singer then shouted, "Let's give it up for the two Charlies!"
Posted by Unknown at 10:48 AM No comments:

Shin busters in the dark 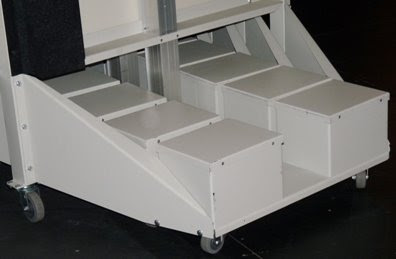 Orchestra Shell Tower Counterweights. There are two things that you can do to make these a little friendlier:

Posted by Unknown at 8:26 PM No comments:

This wooden pin rail with old hemp lines is situated right in front of the primary circuit breaker panel for all the stage equipment circuits, and as you can see, there are old pieces of rusty pipe and corroded conduit being used for belaying pins. 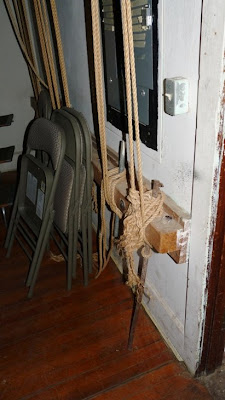 Watch-out above, as you may not know how precariously the overstage equipment is secured.
Posted by Unknown at 7:41 PM No comments: