Actress Kristin Chenoweth was rushed to a New York hospital after she was injured on the outdoor set of "The Good Wife" that was shooting in Brooklyn, NY on Wednesday afternoon, July 11, 2012. 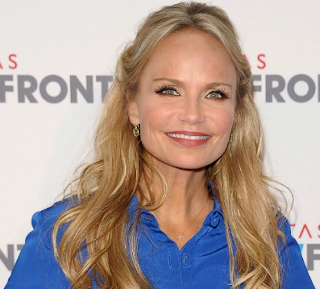 A source connected to the production of the CBS show said that Kristin was struck by a piece of lighting equipment that was dislodged from a scaffold due to a strong gust of wind.

The 44 year old Tony Award-winning actress immediately fell to the ground and her head impacted the concrete.

A witness said that Chenoweth was hit "square in the head" and appeared to be "knocked out cold. I thought she was dead at first."

A crew member called 911 around 5:07 PM ET to report a woman who had been hit in the head by a scaffold.  The item that struck her was later identified as a ‘Lighting Silk’ (a metal frame with a fabric lighting diffusor media) and the boom stand that supported it.  Paramedics treated Kristin on the set fitting her with a neck brace and putting her onto a stretcher.  She was quickly taken away from the set in an FDNY ambulance and was admitted to a nearby hospital in Manhattan.

A representative for the New York Fire Department said that Kristin was being treated for "minor injuries" connected to the accident.

Chenoweth later said that she had been hit in the face by the lighting instrument and then hit the back of her head on the curb, which knocked her unconscious.  She said that she had a 5½” skull fracture, possibly cracked or bruised ribs, some additional injuries to her hip, back, and neck.  Two months later she was still requiring some physical therapy and wears a neck brace from time to time.

On August 13th she resigned from the cast of the show. "It is with deep regret to inform everyone that due to my injuries, I am unable to return to 'The Good Wife' at this time," Chenoweth said. "[I’m] Getting better slowly, and thank you, everyone, for your concern.”

The accident not only caused Chenoweth physical injury, but mental as well. The actress described how she struggled forming sentences and remembering words. She told the NY daily News that “I couldn’t really form a sentence after it happened.  I’m the queen of multi-tasking.  I’m not so good at that right now.   I’ll be like, ‘Mom, are you talking on the thing that you push ... the phone?’ ”

“That’s been interesting, but that’s getting better. I’m grateful.  It could have been much worse.”

The actress has been involved in other performance-related accidents, too.

Posted by Erich Friend at 6:27 PM No comments: