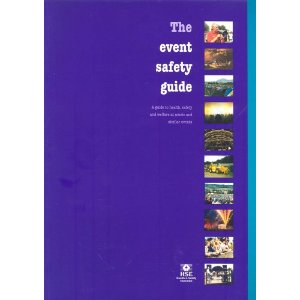 The Event Safety Guide (HSG195) is to be updated for a third edition and the HSE committee is seeking commentary about the changes that should go into the next edition.  Formally known as ‘The event safety guide, A guide to health, safety and welfare at music and similar events'.  The revised guide focuses on risk assessment and management. It is aimed primarily at organizers of music shows and similar events, although the principles set out in the guide may be applicable to other events.

Unfortunately, there is no similar guide in many parts of the world, so this can only be used a a reference for best practices outside of the UK.  This is a well thought-out guide and the information should be referred to by event organizers world-wide, regardless of it's legal enforceability.  Remember:  We are trying to save lives and produce safe events, so seeking-out well researched resources like this should help tremendously in running shows with injury prevention as a goal, not an afterthought.

The current drafts of the documents are available on-line for free, and the associated comment forms are also provided.  Go to: www.eventsindustryforum.co.uk/event_safety_guide/

HSE will consider all comments. However, due to the large number of interested parties, it will not be possible for HSE to reply to every comment.

In light of the numerous event disasters over the last few years, it is important that you do your part to help develop standards that we can all work and live with.  Don't sit on the sidelines - participate!

If you aren't a part of the solution, you are part of the problem!
Another good reason to visit the Event Industry Forum website is to sign-up to be a member of  relevant organizations that participate in this standards development process.

If nothing else, just read the material and be aware of it!
Posted by Erich Friend at 10:48 PM No comments:

The Fire Equipment Manufacturer's Association (FEMA) web site http://femalifesafety.com has several resources that can be helpful in training staff and students about fire safety.  They have a Fire Extinguisher Training Video and other Fire Extinguisher information, as well as information about using a racked Fire Hose Systems.  Take the quizzes and download the info they offer.  Learn not to burn.

Posted by Erich Friend at 12:42 AM No comments:

Zombies are key to workplace safety. 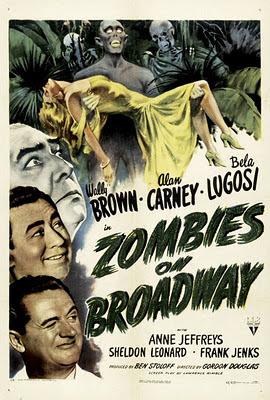 Slippery floors, hot cooking equipment, heavy lifting, loud noises and working alone are some of the dangers teens face as they take that first job or seasonal employment. These are not too dissimilar from the hazards encountered in a performing arts environment.  These dangers can lead to fatalities and serious injury if workers are not aware of them and how to protect themselves against being injured on the job. To help teens stay safe at work, the American Society of Safety Engineers (ASSE) launched an interactive online computer game called “Don’t be a Zombie at Work” and to illustrate how occupational safety, health, and environmental professionals are key to staying safe.

Located at http://www.dontbeazombieatwork.org, the ASSE game is free and features the imaginary evil “BodgeDab” industries. Players find themselves helping their co‐workers avoid becoming a “zombie” by finding tools and information from professionals to stay safe on the job. The game involves a mysterious corporation that has just moved into a large city, led by reputed evil boss Damballa Bokor, and opening businesses all over town. At the same time, the people working at these establishments are becoming “unnatural” ‐‐ zombie-like. And the "virus” is quickly spreading among all workers. The player’s job is to move through these establishments ‐ a restaurant (Club BodgeDab), a warehouse, and an office to save the workers by undoing the workplace hazards. This will save the zombiefied employees and create a safe work environment. If done successfully, the player moves to the final challenge ‐ BodgeDab headquarters and a showdown with Damballa Bokor.

Just a call away, Elle and a team of safety professionals provide the player with clues on how to prevent workplace hazards, save the zombies and stop the dreaded BodgeDab industries.

In addition to Elle and the safety professionals, the player has several tools that can be moved to a tool box / inventory to fix the hazardous situations in each level. Instructions are provided throughout the game as are quizzes.

The “Don’t be a Zombie at Work” game, developed by ASSE members, is another tool ASSE has created and made available to its members and the public in an effort to prevent workplace injuries and fatalities. The other free young worker tools include the “Be Safe At Work: Tips for Teens” book mark and the brochures titled “Important Workplace Safety Guide for Young Workers” and “Preventing Roadway Crashes” available by contacting ASSE at customerservice@asse.org , by calling 847‐699‐2929 or downloading them from www.asse.org/newsroom in the press kit.

In 2007 a total of 117 teens under the age of 18 died from work‐related injuries and another 77,000 teen workers were hurt badly enough to end up in hospital emergency rooms. Nationally, about 230,000 teens suffer work‐related injuries, with most of those injuries occurring in the retail or service industries, according
to the National Institute of Occupational Safety and Health (NIOSH). Overall, close to 6,000 workers die from on‐the‐job injuries and 4.4 million more suffer from injuries and illnesses in the U.S. alone.

Founded in 1911, the Des Plaines, IL‐based ASSE is the oldest and largest safety society. Its 32,000 occupational safety, health and environmental professional members lead, manage, supervise, research and consult on safety, health, transportation and environmental issues in all industries, government, labor, health
care and education. For more information please go to www.asse.org/newsroom or to http://www.dontbeazombieatwork.org.
Posted by Erich Friend at 9:30 PM No comments:

Weebles Wobble - But They Don't Fall Down

What better time to talk about Ghost Lights than during the Halloween season?  One of the prime reasons to have a Ghost Light on your stage is to prevent accidents.  Stages have places you can fall off of like trap openings and the front of the stage, and they have plenty of things to bump into and trip over, or at least bust-up your face or shin real good.  Ouch!  Halloween scars that are permanent.  Just what every aspiring actor needs.

One of the most common reasons for not having a Ghost Light is that they aren't commonly available from theatrical supply houses.  All of the Ghost Lights I've ever seen have been cobbled together by well meaning shop craftsmen. The problem with this approach is that whenever you manufacture something you assume the liability for it as well.  When you combine this with poor electrical knowledge and make-shift adaptations the results can be electrically hazardous as well as physically hazardous.  So where is the safety in that?

Lowes sells it under their Utilitech brand (made by Cooper Lighting), it is UL and CSA safety listed, fairly inexpensive, and most of all, pretty darn indestructible.  The unit has a weighted base that houses the fluorescent lamp ballast, and incorporates a groove around it to wrap-up the cable when it is not in use.

The case is plastic and has a tie loop at the top if you need to hang it up for storage or suspend it. The clear plastic tube that house the lamp acts as a container to keep broken glass off of the stage should you give it a really significant whack.

Fortunately, the unit does NOT come equipped with a lamp (yes, this is a GOOD THING).  When you outfit it with a lamp you can choose the color temperature (CCT) and color rendering index (CRI, or Ra) so that it doesn't clash with your other work lighting, and if you elect to beef-it-up a bit you can install a hard-use lamp like those made by ShatRShield (www.shatrshield.com/catt8page.html)

This unit uses less than 40 Watts of power and lights-up a pretty good area around the stage, so pop one out onto the proscenium line so nobody has to grope in the dark and fall off into the orchestra pit.  That's a dangerous fall to make unexpectedly, and many people over the years have been killed or received career-ending injuries this way. 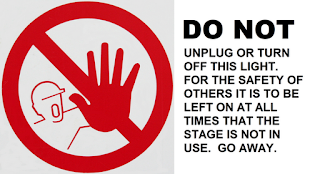 And a note about the Energy Nazies:  There is always some well-meaning but oblivious-to-the-safety-implications individual that feels compelled to turn-off every light they find glowing.  For a  Ghost Light  to be effective, it must be left ON.  You have to twart them at their game.  What can you do?  Post a sign at both the on/off switch on the Ghost Light AND at the end of the cord(s) that supply the power.  Be polite, but be firm.

"I want you to meet my little friend." said Al Pacino's character in Scarface.  This will confuse the energy Nazies for sure:  Add a  photoluminescent  tube over the lamp.  This will continue to glow for about 40 hours after you remove the power from the lamp - so it will give any stage marauders a bit of a chance see where they are going should the power go off (or be switched off).  The Lumenite® Light Sleeve is a semi-translucent,  photoluminescent  sleeve that fits readily over new or existing fluorescent tubes. 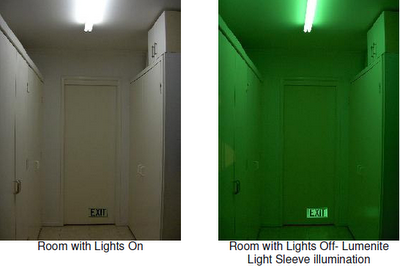 Do you really want to keep it safe and confuse the Energy Nazies?  Add an Uninterruptible Power Supply (UPS) to the Ghost Light.  At only 40 Watts power draw, a small UPS will keep the lights on for hours.  If you use an LED based lamp, then the darn thing could glow for a day or more.
Posted by Erich Friend at 8:45 AM No comments:

Falling Down on the Job 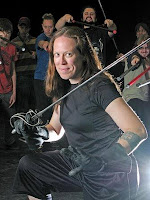 [Today’s Theatre Safety Blog post is presented by Guest Blogger and author Jenn Zuko Boughn.  She runs the Daily Cross Swords blog at http://bonzuko.com and wrote the book Stage Combat – Fisticuffs, Stunts and Swordplay for Theatre and Film.  Jenn is an instructor at Metro State College in Denver, Colorado, and her student-run stage combat club can be found on YouTube.  Further information on the subject can be found at http://en.wikipedia.org/wiki/Category:Theatrical_combat] 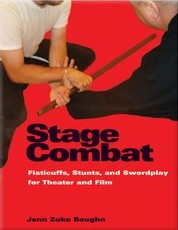