A Pat Benatar benefit concert scheduled for Friday, June 21, 2013 was cancelled at the bequest of her stage crew.  Upon arrival to the venue, an outdoor covered arena in Iverness, Florida, the crew was presented with a stage platform that they did not think was robust enough for the show.  Rather than risk the potential for a structural collapse, they requested that the promoter have the stage structure inspected and reinforced.  A local engineer was brought-in to certify the stage, but the caveats included with the inspection did not satisfy them in time to mount the show.

An article at Celebrity Examiner (www.celebrityexaminer.com/2013/06/26/benatar-releases-photos-of-substandard-stage) describes the scenario at length. Below are some picture released by Pat Benatar and her husband Neil Biraldo that show the deficiencies they found.  It is noteworthy that a performer and crew would postpone an event until it can be presented safely, rather than throwing caution to the wind and saying "Damn the torpedos - full steam ahead!

Just because it might have worked doesn’t mean you shouldn’t give it a second look.   If something looks ‘hinky’, give it a good going-over. 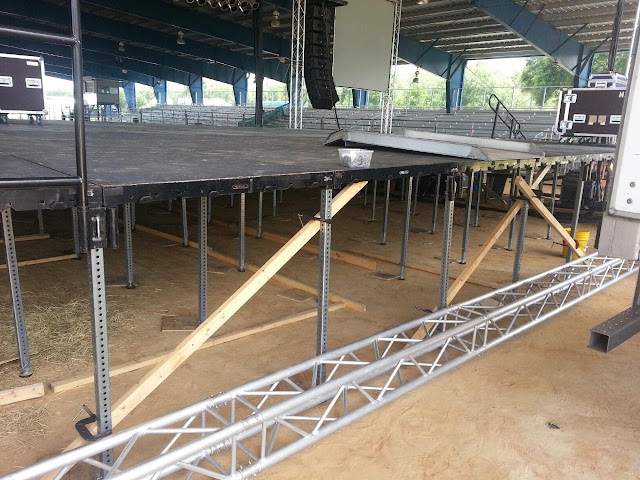 I’ve seen stages with these types of support legs before, and they are generally pretty strong as far as static column loading, which may have been the assumption by the engineer that allegedly certified the stage.  He may have not been considering the lateral dynamics of movements on the stage during load-in, performance, and strike.

The lack of regular diagonal (cross) bracing would make it a wobbly experience.  Note that the 2x4 diagonals shown along the upstage end are not pinned in place to fix their length, instead, they are only pinched against the suport legs with C-Clamps, a connection that can slip loose when loaded becasue it is only held together by friction. 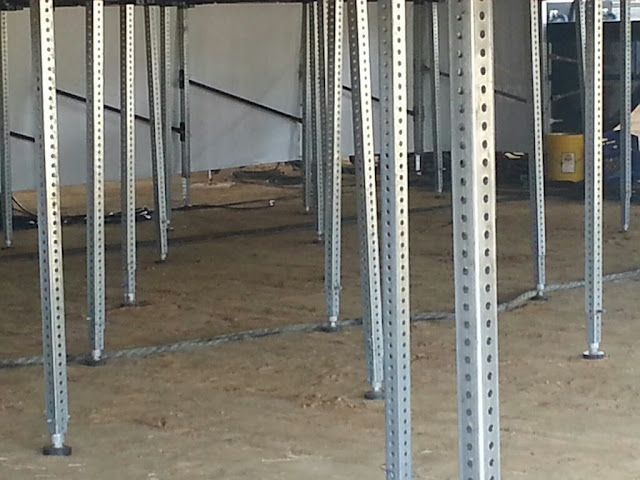 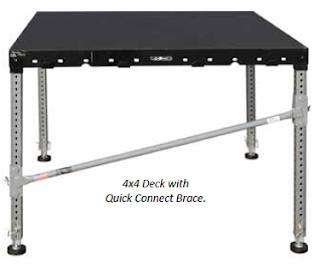 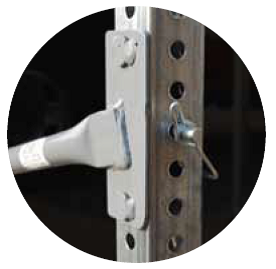 Surprisingly, the manufacturer’s catalog (www.graniteind.com/DOWNLOADS-SeatingStagingFencing.asp) has a chart of the required number of diagonal braces (not cross-braces) that are recommended for stages of various sizes, and it appears to advocate only installing the diagonal braces at about 50-90% of the perimeter locations, with none at the interior supports; whereas their competitor, BilJax (Model ST8100, www.biljax.com/products/events, also sold as AlphaDeck in Europe, www.alphadeckstaging.com recommends a higher number of X-Braces along both axes and between the interior support legs.

The stage in the photos appears to be about 54” tall (as measured by counting the hole spacing in the legs), and according to both Granite and BilJax, stages over 48” tall should have two sets of braces at the recommended minimum spacing.

Stages need diagonal bracing along both axes,  not just one, and all support legs should be braced to prevent them from being skewed from vertical by unexpected circumstances.

The 2x2 or 2x4 stringers seen running along beside the support leg feet do not appear to be attached to the support legs, but even if they were, they would only serve to keep the feet spaced relative to each-other, not to counteract any parallelogram type collapse of the structure.  Diagonal X-braces would both prevent the legs from tilting away from vertical and provide sway-bracing for the entire stage structure.

The foot-pads on the ends of the support legs are resting on what appears to be a dirt arena floor (but it could be dust on a concrete floor, or a canvas drop-cloth – it’s really difficult to tell from the pictures).  Note the plywood square ‘mud seals’ lying adjacent to each leg – they were NOT installed, so the legs could sink into the surface below if it is not a concrete deck.  The ground surface appears dry in the picture, but that doesn’t mean it will stay dry; nor does it mean that the ground is dry and compacted below the visible surface.

HEY!  Er, ah, HAY!  What's that hay doing under the stage?  It's a fire hazard that should have been removed, too.

Show Some Moxy.  If it 'just don't look right', then verify that it will be safe.  Risk Analysis is part of your job!
Posted by Erich Friend at 8:33 PM 1 comment:

June 19, 2:40 AM, Milan, Italy - 34 year-old Egyptian stagehand Farouk Abd Elhamid Khoaled was killed during a load-out accident after the close of the KISS Monster Tour 2013 show at the Forum of Assago arena.  Reports vary by translation, but the general consensus was that three workers were operating either a fork lift / boom lift or a freight elevator (language translation web sites don't seem to agree on this) to move some scaffolding and crates to the loading dock.  The lift was overloaded and began to oscillate, pitching Farouk into the path of a shifting load where he was crushed.  One of  the other workers, 21, was transported to the hospital with serious injuries and the third was unharmed.

The original Italian news article can be found here:
www.lettera43.it/cronaca/forum-di-assago-morto-schiacciato-un-operaio_4367599465.htm

Load-out (strike) can be one of the most dangerous operating periods during an event,  People are tired, it's late at night, and everyone tends to be in a hurry to get it over-with.  This is the time to be one the look-out for ill-conceived operation of lifts, hoists, dollies, trucks, carts, and other machinery.  Don't let your guard down!
Posted by Erich Friend at 4:04 PM No comments:

Spring Storm in Thailand Topples Stage and Kills One

June 17, 2013 - Phuket, Thailand.  A poorly built stage canopy and adjacent speaker towers fell-over during high winds at Paphan Hin public park.  One person seeking shelter near the stage was crushed and killed instantly by the weight of the speakers that fell on him.  The stage was erected for a Prison Fair where furniture and other goods fabricated by the prisoners are sold to benefit them.

Witnesses say a 62 year old man that was a motorbike taxi driver, Mohammad Poksakul, sat near the stage and when a 60 kph wind gust pushed the canopy sideways, it forced the 10m tall speaker tower over, which in-turn, fell on to him and killed him.


Concert season is windy season everywhere.  Be alert to bozos that do not understand how to secure the stage.  Be alert to promoters that don't evacuate the area when storms approach.
Posted by Erich Friend at 8:03 PM No comments: