Lancaster, New Hampshire 2015-08-03, 5:46PM - A summer storm struck a circus tent about 15 minutes into the performance.  Witnesses say that the tent lifted-up allowing the metal support poles to fall over onto the audience.  The National Weather Service had issued a severe thunderstorm warning just 20 minutes before the tent collapse.  The show was on-going when the storm hit the site bringing one inch hail, 60 mile per hour winds, and lightning.

The circus company, Walker International Events of Sarasota, Florida, made no effort to notify anyone of the pending conditions, stop the show, or evacuate the tent.  About 100 people were in the tent when it collapsed. 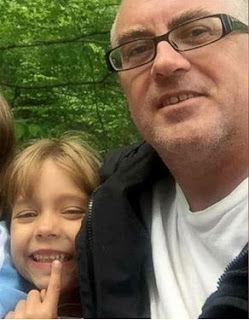 Visiting from Concord, Vermont, 41 year old Robert Young and his 6 year old daughter Annabell were killed when a tent support pole landed on them.  Another 32 people have also been treated for injuries.

State Fire Marshal Bill Degnan said "The circus did not have a place of assembly permit, and that's one of the things that we're looking into."  Degnan also said that it's unknown why the show continued during a severe thunderstorm warning.  He added that it was the responsibility of the circus organizer to monitor weather conditions.

Lancaster is a small town in the northern part of the state near the White Mountains National Forest.
Posted by Erich Friend at 10:46 PM No comments:

Foaming at the mouth? Well, that's better than on the stage.

Foam materials are used in many different ways on the stage, and many times no forethought is given to the legality, safety, or potential consequences that accompany these choices.  Many foam materials are very combustible, and when they do ignite, they produce an enormous amount of black toxic smoke.  This is smoke so thick that it can kill you in seconds.  Need proof of this threat?  Here are three prime examples of recent fires that were all largely foam fire related: 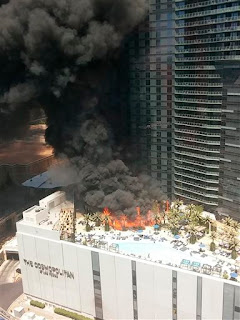 At left is the pool deck of the Cosmopolitan Hotel in Las Vegas, Nevada.  You can see the fake palm trees that are sculpted from foam burning wildly.  NOTE THE AMOUNT OF BLACK SMOKE BEING PRODUCED.  If this was inside a theatre it would completely fill the stage house and audience chamber.

In each case, the primary source of fuel for the fire was foam based products, and in each case the smoke they produced was thick and deadly.  All too common is the use of foam insulation board like "Foamular" (see below) and "Rmax R-Matte".  This blogger sees it used for props and set walls with no attempt to enclose it or treat it with any fire retardant.  What are these people thinking!? 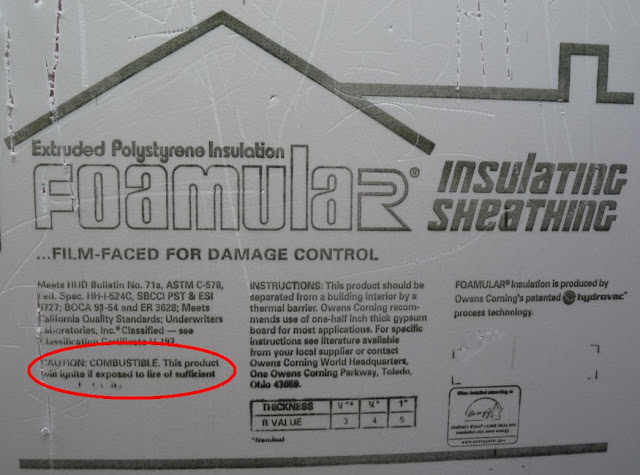 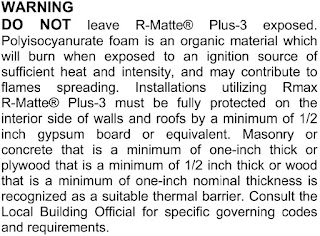 Also be aware that the NFPA 101 Life Safety Code specifically addresses foam materials uses in scenery and props in Article 13.4.6.11 Flame Retirement Requirements.  If you work in a theatre you should have a copy of this book.  It is fairly inexpensive and full of relevant information for theatre operations - particularly Chapter 13, but other Chapters and Annexes are very important, too.

Posted by Erich Friend at 8:54 AM No comments:

Amarillo, Texas - 2015-07-31, 5:54PM - 21 year old Peyton Trueblood was killed Friday evening when a fireworks storage building exploded and sent flaming debris over 200 yards from the blast site.  Peyton worked in the Palo Duro Canyon park amphitheatre where the musical "Texas" is presented.  Reports say she was taking inventory between two storage building when the explosion occurred.  Peyton was from Tuscaloosa, Alabama.

The Texas State Fire Marshal is investigating to find the cause of the incident.  Kris Miller, executive director of the Texas Panhandle Heritage Foundation, which produces the show, said that about 1,600 rounds of fireworks — enough to last until the end of the show’s season on August 15th, plus rounds stored for homecoming at West Texas A&M University — went up in the explosion.

Miller added “She had talked about what an honor it was to work with the fireworks and being certified to do that.  And when I spoke to her mother last night, she said something about how Peyton felt proud about that.”

Park officials say they will continue to working with the State Fire Marshal and the Randall County Sheriffs Office as the investigation continues.

Wood Dale, Illinois - Sunday, August 2, 2015, about 2:40PM - Like many summer storms, this one popped-up quick, dumped rain and hail, and blew hard.  Unfortunately, the city of Wood Dale didn't learn any lessons from the numerous storm-related disasters over the past few years, and completely failed to evacuate the Prairie Fest site before the weather hit.  There was a Junior High School immediately adjacent to the event site that could have been used as a durable shelter.  A tent structure on the site was filled with about 100 festival goers seeking cover from the onslaught of hail, and then the wind up-ended the tent tearing it from it's anchors.  One of the main tent support poles fell and struck 35 year old Steven Nincic in the head and killed him.  He is survived by his wife of three years and two daughters.

Other events in the region had watched the weather front more closely and had evacuation plans prepared and in effect.  Winds of up to 60mph were reported in the area.  The festival site is very close to Chicago's O'Hare International Airport, so presumably excellent weather radar feeds were available for monitoring had the city elected to do so.  The city claims to have had an emergency plan, but no sign of it being implemented was visible.

First Responders had to cut through the tent to get to people trapped under the wreckage.  The remainder of the festival was cancelled after the weather passed, as police and ambulances came to treat the numerous injuries.

Lawyers for the family of Steven Nincic are filing an injunction to keep the tent site intact until a complete investigation can be completed, but many vendors and carnival ride owners have already packed-up and left.  An attorney representing the family released a statement contending that “the true tragedy” is that incidents such as the tent upheaval “are not only potentially predictable,” but “preventable with prudent caution and control of events in the face of available meteorological information.”  Attorney Louis C. Cairo said the weather and “the propriety of the tent materials and its installation” will be “litigated extensively.”

The city said that the tent was supplied by a vendor, and it had been inspected for electrical compliance, but not structural integrity.  This blogger finds this information to be more of a smoke screen to deflect attention away from the lack of weather monitoring and assigning someone the authority to close-down the event and evacuate people to hard shelters.  A safety plan, when implemented, reduces the need to rely on an emergency plan.  Safety plans address issues before they get to the point of being an emergency.
Posted by Erich Friend at 2:01 AM 1 comment:

The International Alliance of Theatrical Stage Employees (IATSE) recently launched its safety hotline so members can report hazards on the job.

Because IATSE members commonly work for many different employers, the system of employers reporting hazards to OSHA sometimes breaks down. The IATSE Safety Hotline is a safety net.

The IATSE Safety Hotline is not intended to take the place of an employer’s hazard reporting plan or to relieve the employer from their responsibility to keep jobs safe.

In The Official Bulletin, the IATSE monthly newsletter, Kent Jorgensen, IATSE's Chairman of the Safety Committee, provides more details on the safety hotline on page 42.  This also includes guidelines for members to follow.  See: http://iatse.net/member-resources/publications/official-bulletin/official-bulletin-2015-q2-no-648 Posted by Erich Friend at 3:48 PM No comments: