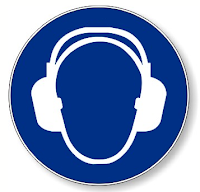 Ever have that funny ringing in your ears that just won't go away?  Maybe feel like you can hardly hear anyone around you and you have to speak-up to be be heard?  Maybe everyone thinks your audio mix sucks, but they won't tell you?  It could be that you have suffered hearing damage. This can be very serious, as most damage is collectively irreversible - it just gets worse, and never gets better.

"Say what?"  "Huh?"  "Could you please repeat that?"  "Speak-up a little, I didn't quite get that."  Sound familiar?  It could be that you have suffered hearing damage and aren't aware of how extensive it is.

There is Temporary Threshold Shift (TTS) which is where your ability to hear quieter sounds is diminished but recovers over the next day or so.  This is common if you are working around loud machinery or at a loud concert.

Then there is the more serious part:  The permanent damage.  Each time you are exposed to loud sounds you can loose a little bit of your hearing forever.  Hearing Loss is cumulative and is not reversible.

Another common symptom is the ringing in your ears that just won't go away.  This is Tinnitus.  The intensity may vary over time, but it, too, is generally permanent.

What can you do to prevent further damage to your ears?  Learn about hearing loss prevention and educate those around you.  It is important to involve others as it is often noises that occur due to the actions of others that affect you the most.

A good first step is to get a base-line assessment of your current hearing capabilities. Go to a hearing specialist (audiologist) and have your hearing tested.  Keep a record of the test.  Go back for regular check-ups to see of you hearing damage is getting progressively worse.

Bangin' heads in the workplace

Posted by Erich Friend at 8:54 AM No comments:

RigCalc for smart phones and on the web

D2 Flying Effects are riggers that fly people and things.  They are also pretty savy programmers, too.  At their web site you can find RigCalc and a bevy of other software tools for making life on the fly rail easier.

They also have a Rigging Math Primer online at: www.d2flying.com/riggingmath/

There are a bunch of really handy online calculators at: www.d2flying.com/RigCalc.html

The smart phone app looks like this (2 of 4 screens shown): 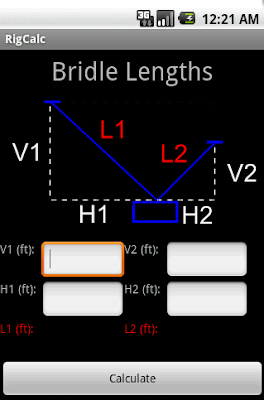 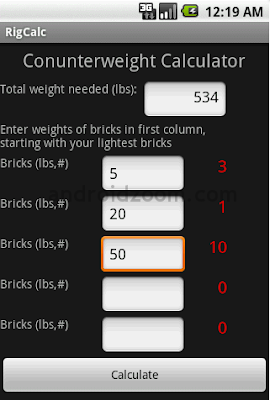 A really handy app for stackin' steel bricks.
If they add a batten loading calculator to get the needed weight it will be great.
Just $9.99.  Where to get it: http://www.androidzoom.com/android_applications/productivity/rigcalc_qmvr.html

Also available for the iPhone and Blackberry with links at: http://www.rigcalc.com/
Other related blog entries:

"Well, here's another nice mess you've gotten me into!" - Ollie

StageCo has been sued in Texas state court by Christie Lites for damages sustained when a 90-foot lighting tower erected by StageCo collapsed prior to a nationally televised motocross event at the historic Fort Worth Stockyards in June, 2009. 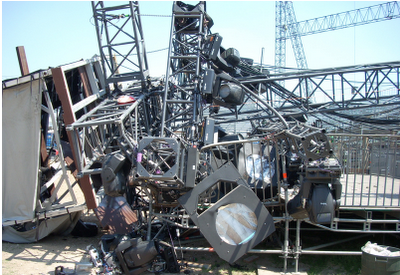 Christie Lites, Plaintiff in the lawsuit styled Cause No. 096 246397 10; Christie Lites Dallas, Inc. d/b/a Christie Lites v. StageCo U.S., Inc.; In the 96th Judicial District Court in and for Tarrant County, Texas alleges that StageCo was negligent in the design and construction of the tower. A specialized lighting array and equipment owned by Christie Lites, elevated atop the tower was totally destroyed.


Christie Lites CEO Huntly Christie commented that it was extremely fortunate that the collapse of the tower occurred just days prior to the scheduled event, with only physical damage to the lighting array, grandstands, and general admission area.  Had the tower collapsed during the event it might have caused severe injury, and possible loss of life, to spectators and field personnel.  The tower collapse was initiated by wind gusts that blew as a storm passed through the area.  Engineering analysis of the structure, tie-downs, and other safety precautions have not been made public.

Christie Lites has an outstanding safety record in the industry.  Prior to this incident it has never had to take legal action against a fellow industry vendor.  Attempts to resolve this matter amicably have been frustrated since the filing of the lawsuit.

Tom Bilsen, Stageco Operations Manager states: “Stageco takes its responsibilities very seriously, we are fully insured, so all parties will be appropriately protected and reimbursed.  “Following this unfortunate incident we initiated our own investigation; there are multiple parties and multiple factors under consideration such as unpredicted wind gusts, and most importantly, there were no injuries. This law suit relates to the collapse of one of eight towers days before the event which took place as planned.  We anticipate the judges will need time to resolve this complex matter.”

Christie Lites is seeking actual damages in excess of $500,000, and to ensure that this type of incident does not jeopardize public safety for future events, $1,000,000 in punitive damages.  Actual damages likely include the actual cost and the lost revenue cost of the destroyed lighting equipment, and the extensive overtime labor required to clean-up the wreckage, ship-in new equipment, and set-up for the show a second time under a very compressed time-table.  There was no mention at this time of the costs or law suits by other show support vendors like those supplying the viewing stands, seating, or other nearby damaged structures.  The disassembly of a toppled structure is very hazardous, as well, and requires special precautions against additional worker injuries during the salvage and clean-up operations.

Inquiries or witnesses to the event should be directed to Scott Douglas Cunningham, The Cunningham Law Firm, 7500 San Felipe, Suite 1010, Houston, Texas; (713) 273-8950, counsel for Christie Lites.

The past few years have had numerous show tents, towers, and other venue structures that have been toppled by high winds and inadequate anchorage.  It should be no surprise that towers, canopies, and tents must be well secured against high winds.  Failure to provide adequate anchorage and structural integrity for temporary structures has resulted in numerous deaths, injuries, and significant property damage.

It is imperative that promoters, staging companies, and other industry professionals take note of the risks involved with outdoor events when it comes to the unpredictability of natural forces.  It is essential that someone be stationed where they can scan the horizon for threatening weather activity, have continuous access to weather radar reports, and have the authority to call a show and evacuate an event site should inclement conditions arise.  Event evacuation plans must have time-tables that estimate the amount of time required for an orderly egress from the venue, as you don't want patrons caught out in the open on the way to transportation or more robust shelters. 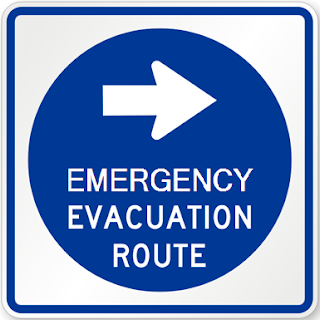 Physical threats to the public and staff alike include:
An any of these weather threats can instigate crowd mentality panic and rushing for exits, which, in turn, can cause people to push, shove, and possibly crush someone that has fallen into the path of the surging crowd.  Proper Emergency Crowd Control Planning is a must for outdoor events.