The Show Must Go On — A Live Events Case Study

This live events case study reviews how "the show must go on" when a million dollar video wall was destroyed by a severe storm. The elements of the case include:

·    A major touring entertainer on a national tour
·    Millions of dollars of high end/high tech gear
·    An outdoor, summer evening performance
·    Whose insurance company is responsible?
·    Who makes the call to cancel the show?
·    Lessons learned

Scott Carroll has worked exclusively in the insurance industry since 1984 (28 years). He started his insurance career as large company underwriter; Manager (commercial insurance and marketing) and eventually as branch manager for the western region – Los Angeles, in excess and surplus lines.

Scott left large carrier underwriting for the distribution side of the business, first as Chief Operating Officer for a large regional brokerage firm based out of Los Angeles, followed by his current role as Executive Vice President and Program Manager of the Take1 Insurance, underwriting program, a division of Dallas, based US Risk Insurance Group.

Scott has been with US Risk for the past seven years, in their Orange County office, first having opened that branch for US Risk, in 2005, and later managing the Take1 Insurance underwriting program focused primarily on the entertainment insurance industry including but not limited to audiovisual and communications companies; TV, documentary and film production companies; various professional sports team coverage as well as touring entertainers; mobile satellite/mobile transmission firms; and more.

Webinar is FREE and brought to you by InfoComm International

This Link will open the program as an .mwv file in your media player.
Posted by Erich Friend at 7:34 PM No comments:

The celebration of Easter frequently has re-enactments of significant events in the life if Christ.  In this case, an Brazilian actor, Tiago Klimeck, 27, was recreating the suicide of Judas Iscariot as he hangs himself as described in the Bible in the book of Matthew.  This is part of a production of the play "The Passion of the Christ."  The event was presented on Good Friday in the southern city of Itarare, Brazil.

Klemick was wearing a fall protection harness and allegedly knew how to arrange the equipment under his robe costume so that the rope around his neck would not cause him any harm.  He had borrowed the harness from the local Fire Department on previous occasions, so they did not review the donning of the equipment with him.  Witness say he was hanging nearly four minutes before anyone became concerned.

Luiz Carlos Rosner owns a sandwich cart next to the city square where the play was taking place. He described the anxiety after cast members realized Klimeck was unconscious.  "One of the actors came over to me, desperate, explaining there was someone unconscious hanging from the rope and that he wanted to cut it," Rosner told TV Record. "I was a little worried about giving him a knife in the middle of the crowd."

The harness, along with the rope used in the play, are now being analyzed at the Criminal Institute of Sorocaba.


-----------------------------------------
No matter how confident performers and technicians are in setting-up stunt work, it is vital that pre-show rehearsals review the effect, the equipment, and the adjustments of the components to ensure performer safety.  It is also important to have a quick way to check if performers are in trouble.  In this situation, a discrete hand signal that would only be possible if the performer is conscious might have provided just enough warning to  a spotter that the effect had been compromised.  Ideally, the harness and rope system would have been reviewed to ensure that the relative tensions were proper.  Presumably, there was someone there to lower the actor to the ground after the scene, and this person should have had eye-contact and/or intercom communications with spotters, too. The search for a knife to cut the actor down indicates that there was no easy way to lower the performer to safety.

NO stunt is worth your life.  Plan, check, certify, evaluate, think of all the ways the stunt might go wrong, re-evaluate, check again, test it, and re-test it.
Posted by Erich Friend at 9:10 PM No comments:

April 18, 2012 - Jerusalem, Israel.  A twenty year old female IDF medical corps officer, Second Lieutenant Hila Betzaleli, died from injuries sustained when the over-stage canopy for an outdoor event collapsed onto her.  Seven others were injured, too.  The incident happened as the Color Guard soldiers were rehearsing for the National Fallen Soldiers and Victims of Terrorism Remembrance Day ceremony on Mount Herzl.  According to reports, it was very windy at the time of the collapse, and a truss laden with lights fell when a cable failed to stabilize the structure.  The structure was about 10 meters tall.  An initial investigation revealed that a cable supporting the lighting fixture truss was torn apart and as a result, the fixtures collapsed and dragged a concrete cube that weighs a few tons. 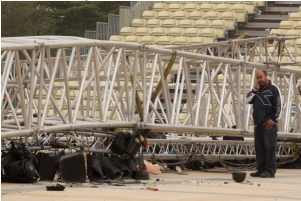 Emergency services began treating the wounded shortly after the collapse and there are fears that some people may be trapped under the debris. A spokesman for Magen David Adom said that it was the sound and lighting system that collapsed onto the stage during rehearsal.

Eight of the people involved in the erection of the stage were arrested and held pending further hearings.  Four were later released, and the remainder were released under house arrest pending further investigation.  The four detained were being held on charges of negligent manslaughter.
The four suspects, including the owner of the company that built the lighting rig, Elad Lavie, the company engineer, Oren Varshavky, the security consultant Yitzhak Zuker, and the director of the ceremony, Alex Sela, were released to seven days house arrest. They cannot contact anyone for 30 days, as the investigation is continuing. All the suspects must also pay financial guarantees.

Design Group, the company that erected the lighting fixtures said in response that it adhered to the instructions of engineers and supervisors and did not veer from safety instructions.

"The installation was not built today and has been erected for more than 10 days," the company said.

"It has been checked by safety engineers, passed two examinations and received the necessary permits. Design Group was responsible of following the instructions given by the engineers."

Elad Lavie’s lawyer, Kobi Kamar, said Lavie still stands by his claim that the company received approval for the structure. Kamar denied that the suspects are playing a game by shifting the blame around and implicating each other.

According to Israel Army Radio, the suspects stand accused of forging documents and paying bribes to secure the Mount Herzl job and others.

Jerusalem District Police Department  Commander Manny Yitzhaki said that police were investigating every aspect of the incident. “We will investigate the facts one by one to understand how this happened and who is responsible,” he said.

Despite the tragic event, the authorities have decided that the ceremonies at Mount Herzl will go ahead as scheduled. 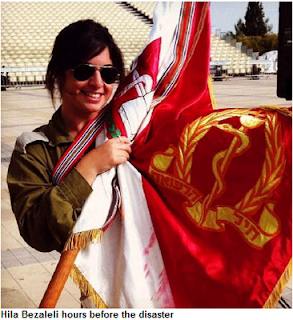 Sigalit Bezaleli, Hila’s mother, has been invited light a torch at the ceremony with Knesset Speaker Rueven Rivlin, a family representative announced on Monday. “The family welcomes the decision to have the ceremony continue as planned – this is what Hila would have wanted,” the family said in a statement.

Family friend, Bar Sitton, noted that Har Herzl was like a “second home” to Bezaleli, whose mother Sigalit has worked for 16 years in the administration of the site.  He added that it was tragically symbolic for Sigalit to be honored at the very place where Hila lost her life and where she is buried.  Sitton said that Sigalit Bezaleli is dedicating her torch to halting the “Israeli culture of carelessness.”

Follow-up: 2014-04-30 - Six Charged with Criminal Negligence and Involuntary Manslaughter after Israeli courts consider the facts.  Charges were brought against five people and a staging company associated with the April 18, 2012 collapse of a stage structure that killed an IDF officer and injured seven other military personnel.

On April 30, 2014 Jerusalem District Court noted that all those charged in the incident would have the opportunity — which could also be waived — to meet with prosecutors in the case for a hearing on their involvement in the incident.

The five individuals charged, according to reports, included Elad Lavi, Doron Lavi, Taimuraz (Tomer) Laonidzeh, Yitzhak Zucker, and Oren Varshavsky.  The staging company owned and run by the Lavis — Itzuv Bama — was named as a sixth party charged in the accident

The named individuals include the founders and CEO and COO of the implicated staging company (Elad and Doron Lavi) along with its director of operations (Laonidzeh). Zucker and Varshavsky were, respectively, the safety consultant and engineer working on the project.
Posted by Erich Friend at 6:07 PM No comments:

Back in August of 2011 there was a collapse of the canopy over the stage at the Indiana State Fair (http://theatresafetyblog.blogspot.com/2011/08/updates-on-indiana-state-fair.html, http://theatresafetyblog.blogspot.com/2011/08/indiana-state-fair-stage-collapse-post.html) that resulted in the death of seven people and injuries to over fifty others.  The State of Indiana commissioned investigations to determine the root causes of the accident (or negligence) and these reports are now available to the public for review.  They can be found at www.in.gov/sfc.
Posted by Erich Friend at 11:48 AM No comments: