Burning the candle at both ends...(Updated)

When Disney's Imagineering group needed a spooky candle for their "Haunted Mansion", they couldn't be bothered with using real candles.  The fire hazard alone makes that a no-go, but as with all things in theme parks, the operational cost has to be evaluated, too.  Replacing real wax candles multiple times per day would be both material and labor intensive.  Using incandescent lamps wasn't a real good option either, as they consume lots of energy, have relatively short lives (by theme park standards), and still generate a lot of heat.  More heat means more air conditioning, means more electric bills.  Besides that, they just don't look like a candle - you know: flickering randomly, soft ethereal glow, and all that spooky stuff.

Well, if you can bring Abe Lincoln, and other animatronic things to life, why not a candle?  Add a little Disney magic to some LED's and a bit of creative molding for a candle body, and poof:  You have a Dream Candle.

First introduced at the 2010 CES show by Luminara LLC (originally Dream Candles, LLC), they have exclusive rights to commercialize Disney's patented idea.  They now have product available and information can be found at www.myluminara.com (this site redirects to a UK site, but if you go to www.facebook.com/pages/Dream-Candles-by-Luminara-LLC/415944677305 you can find US resellers.)

Don't use real candles on stage unless you can meet the requirements of NFPA Life Safety Code 101, Section  13.7.3.  If you do plan to use real candles, then you should obtain a copy of NFPA 160 Standard for the Use of Flame Effects Before an Audience.  This standard is referenced by the 2009 NFPA Life Safety Code 101, Section 13.7.3.(2).  Failure to know the requirements of the law is not an excuse to break the law.

There are other pretty good LED candles out there, like Smart Candle (http://smartcandle.com/), and some are even less expensive than real candles, and they don't drip hot wax on your actors, melt your props, or ignite your costumes that you failed to treat with fire retardant.  (Ref: 2009 NFPA Life Safety Code 101, Section 13.4.5.11 - Flame Retardant Requirements).
Posted by Erich Friend at 9:40 AM No comments:

Take note of the other posts on Fire Doors to see how they play in your theatre. 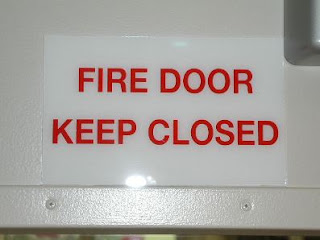 Make a pre-emptive strike against the spread of smoke and fire by keeping all fire doors closed and latched unless you are moving equipment or personnel through the door.  Do not prop fire doors open with chairs, microphone stands, stage weights, flag poles, desks, speakers, pianos, boxes, backpacks, wedges, flip-down props / stops, or by tying the handle to a nearby railing or wall.  If the door cannot close and latch on it's own, then it must be repaired.
Posted by Erich Friend at 9:18 AM No comments:

Sunday, June 17, 2011, Ottawa, Canada - A storm blew over an outdoor concert and collapsed the stage canopy on Sunday afternoon.  Three people suffered minor injuries, and the remainder of the show was cancelled.  Here is a mobile phone video shot by Ben DiTommaso:

This really shows how fast a weather event like this can take down a structure.

The extensive article in the Ottawa Citizen (http://www.ottawacitizen.com/Bluesfest+stage+collapses+storm/5116446/story.html) describes the storm's arrival and the crowd management issues.  It is interesting that the local weather reports indicated a fast approaching (100 km/h) system with wind gusts up to 140 km/h. Yet the Festival director, Mark Monahan, referred to the storm as "an unexpected event."  The question needs to be asked as to why the organizers didn't consider evacuating the site earlier?  It was easy to see from the weather information available that the system was going to pass right over the city.  This would have been an excellent opportunity to use the big video screens to announce the impending weather and request that the crowd take-cover.  Event organizers should have pre-composed informational video frames and audio announcements to address this, and other emergency information.

As mentioned in previous posts, it takes time to clear an area and secure stage canopies and towers, so there MUST be a willingness and effort on the part of the show management to pre-emptively protect the public.  If one of the tall towers that were supporting the speakers were to have blown-over onto the crowd, the injuries could have been substantial.  NEVER UNDERESTIMATE THE POWER OF MOTHER NATURE.

The concert on 10 July 2011, in Dallas, Texas' American Airlines Center Arena (AAC) came to an abrupt halt after some pyrotechnics started a fire on a lighting truss near the front of the stage.  Witnesses say the front rows of the audience quickly cleared-out after sparks and fire started spewing from the truss.  Local TV station and CBS affiliate KTVT had first-hand reporting because several of their employees were attending the show.  KTVT's coverage of the situation can be found here:  http://dfw.cbslocal.com/2011/07/08/rihanna-concert-ends-with-fire/


A video of the fire shot by concert goers can be found on YouTube:


Quick acting show crew managed to get to the blaze with a fire extinguisher and subdue the flames.  (Not an easy task 30' in the air on a wiggly piece of truss!  Kudos to that guy!)  It appears that the AAC and concert promoter Live Nation didn't have a coherent emergency plan, as it was several minutes before the arena lights came up, and then another minute before an announcement was made that the show was over and that patrons should exit the facility.  Although there was some sense of urgency by the crowd that caused a back-up at the arena exits, once they made it to the concourse they were greeted by vendors still trying to sell them t-shirts and other souvenirs.  Hmmm.  What part of 'LEAVE THE BUILDING" didn't they get? 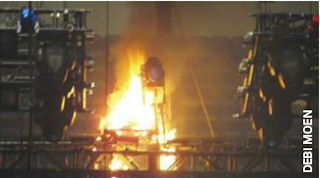 When watching the video shot by local news crews at the Great White concert in the Station nightclub in East Warwick, Rhode Island, three minutes into the fire there had already killed numerous people.  So, what took so long in the AAC?  Who was asleep at the switch in Dallas?

You can hear the show cancellation announcement on some of the videos found on-line, and it's not very good sounding (OK, it was a cell-phone mic making the recording, but you can still get a sense that the speech quality was less than ideal).  Yet another reason that a professionally recorded announcement is a good idea.  The playback device should be EQ'ed so that the voice track has maximum intelligibility (i.e. not muddy with too much bass) when played-back through the venue's sound system.  It should automatically override ALL other program feeds so that any stage mics, musical instruments, and/or background music tracks are completely muted.

When there is a fire or other emergency incident during a show, there should always be someone that has the authority to call the show, get the lights on, and see to it that an appropriate announcement is made to the audience without any delay.  There is no time to think abut Box Office losses, only people's lives.

Know the difference between a safety plan and an emergency plan - the first is what you need so you don't need the second,  The second is what you need when the first one wasn't successful.  An article published in the IAVM (formerly IAAM) Facility Manager magazine about this can be found here:  www.scribd.com/doc/21929545/Teqniqal-Systems-Facility-Safety-Planning

IAVM (International Association of Venue Managers) sponsors regular training classes on Emergency Planning and Employee Training to address these types of scenarios.  Is your venue a participating member?  If not, consider becoming one, as they have a large body of resources that can help any venue, large or small, non-profit or for-profit, private or public.


This blog's author, Teqniqal Systems, also provides assessment, guidance, and training for venue staffs.  Just like the Girl Scouts, you should always 'Be Prepared.'
Posted by Erich Friend at 8:46 PM No comments:

The U.S. Department of Labor’s Occupational Safety and Health Administration (OSHA) has recognized the International Code Council’s (IIC) 2009 International Fire Code (IFC) as an alternate compliance option for means of egress in its Occupational Safety and Health Standards.  The ICC petitioned the federal agency asking for its code to be recognized as a way for an employer to demonstrate compliance with the OSHA Exit Routes and Emergency Management (formerly called Means of Egress) requirements.

“In jurisdictions where the 2009 International Fire Code is enforced, employers whose buildings have been inspected and approved can use that approval to demonstrate compliance with OSHA requirements (Section 1910, Subpart E, Standard 1910.35),” International Code Council CEO Richard P. Weiland said. “We thank OSHA for recognizing the safety attributes of our code as well as the professional expertise and science that goes into the code’s development.”

The Council’s petition, which started in 2004, was offered on behalf of ICC Members and all jurisdictions that adopt and enforce I-Codes; building and fire code enforcement officials; and building owners and managers with facilities that are maintained in compliance with the I-Codes.

“Allowing the IFC regulations to be used for exiting buildings will save money by eliminating the need to demonstrate compliance with dual regulations, and by avoiding potential construction modifications due to conflicting codes,” Weiland said.  “OSHA’s recognition demonstrates collaboration between the agency and those who share the mission of protecting the health and safety of building occupants.”

The U.S. Department of Defense and the U.S. General Services Administration supported the Code Council’s petition along with local and state jurisdictions, including New York state, Jefferson County, Colorado, and the city of Hampton, Virginia.

Twenty-seven states with approved Occupational Safety and Health plans also will have to update their plans to incorporate the new rule within six months of the final rule’s publication.  The final rule was published in June and takes effect July 8, 2011.

Posted by Erich Friend at 8:14 PM No comments:

Breath deep (if you can)

Professional Propmaster, Eric Hart, writes a handy blog called "Eric Hart's PROP Agenda".  His latest post about the need for fresh air in the shop and in particular, your lungs, is a good read.  Check it out!

Other good resources include:

Posted by Erich Friend at 5:45 PM No comments: