Ladder Safety Should Be A High Priority 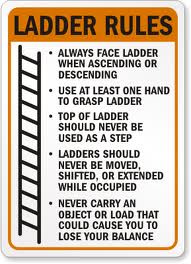 Ladder Safety is an ongoing concern in the performing arts as more and more venues are constructed with inadequate access to the working parts of a production facility. Powered Manlifts are one possible solution, yet many administrators somehow think that they are less expensive than a trip to the hospital.  Even with a Powered Manlift, ladders are frequently found around many workplaces because they are a convenient way to access many items

Make a concerted effort to train students, co-workers, and administrators about Ladder Safety so that there is a consistent perspective on the subject throughout your organization.

The AFL-CIO's Construction Trades Department has produced an 8-page Ladder Safety Guidebook that can be downloaded free at: www.sprick.net/ARES060808/LadderSafety.pdf 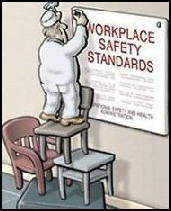 Don't use other junk for Ladders!
Posted by Erich Friend at 8:41 AM No comments:

Yeah, they have an app for that, too.

The iAuditor application for the iPad provides a convenient way to deploy checklists to all of your department heads and workers.  This customizable tool allows you to set-up check-lists, take photos, sign the document, and e-mail it so you have a clear record of inspections.

This app replaces paper-based reporting and allows the user to enhance reports with photographs showing compliance issues.  It also greatly reduces the likelihood of late submissions and falsified time-stamping.

With a smart interface to build forms, iAuditor allows for forms to be created on-the-fly from within the app, a form can be created and modified to suit departmental needs throughout the theatre plant.  By giving users the power to create their own audits, iAuditor can be applied to thousands of situations. This level of customization in auditing has never been seen before in the safety industry. 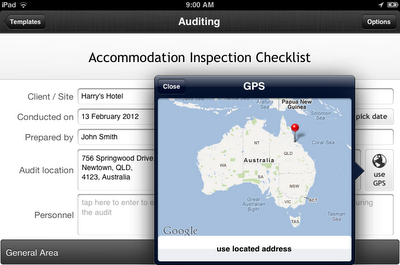 The iAuditor app has full GPS integration, too, so it can identify reports applicable to specific venues for large areas like theme parks, or be used on tour venue-to-venue. 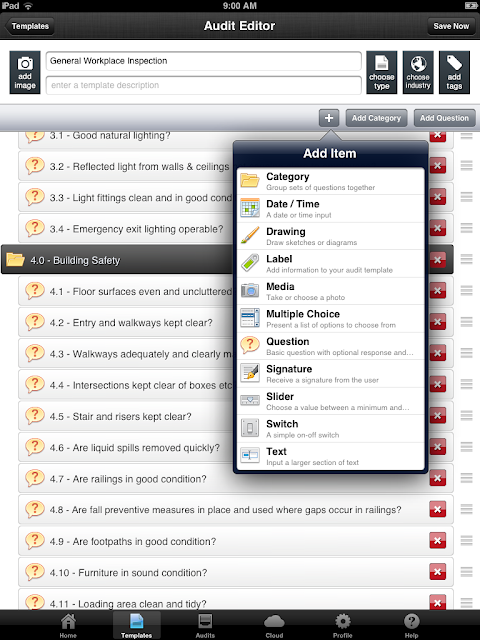 An unlimited number of forms and checklists can be created using the form building screen, and templates can be shared between users. Ready-to-use audit forms are also available for free download from the SafetyCulture Secure Online Cloud.

Upon completion of an audit or checklist, the form can be quickly e-mailed as a PDF, which is compatible with almost any computer, smartphone, or tablet with a PDF reader application.

An audit checklist can be used by workers to ensure they are meeting their reporting and record-keeping requirements. Uses include:

“Businesses all over the world are using technology to work smarter, not harder. We’ve listened to the people who are out in the field every day, and we’re committed to helping them work safer by using technology. With iAuditor, we’ve shown another example of this commitment; an incredibly versatile auditing and checklist app that is free to use and free to download.” Said Luke Anear, Managing Director of SafetyCulture Australia (www.safetyculture.com.au).

More information about the iAuditor app can be found at: www.safetyculture.com.au/iauditor/
Posted by Erich Friend at 12:15 PM No comments:

Fork Lift Safety - There's an App for that 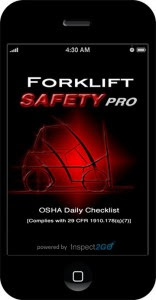 The Forklift Safety Pro application allows lift truck operators to complete their daily or pre-shift inspections electronically using their iPhone or iPod mobile device.  The completed inspection reports are then transmitted electronically to the email address of your choosing, typically a supervisor or dedicated inspection form repository.


According to Dale Verseput, Select Equipment’s Director of Sales, “The daily and pre-shift inspection reports as required by OSHA under Section 1910.178(q)(7) really lend themselves to the portability of a mobile application.  With Forklift Safety Pro, the employer has an inspection report which is Date/Time Stamped, is secure and durable, and can be archived in a paperless format.”

Other features of the application include a daily safety question, a counter which lets the operator know how many days are left before he or she is required to be “re-certified”, and if needed, an OSHA incident report form, a service request form, and an unsafe vehicle reporting form.

Additional Resources and Safety Video:
http://theatresafetyblog.blogspot.com/2011/08/forklift-incident-drops-led-screen-on.html
Posted by Erich Friend at 8:00 AM 1 comment:

The Move To Automation article interviews numerous industry people and gets their take on the safety issues at hand.  http://www.stage-directions.com/current-issue/59-sets-scenery-and-rigging/3970-the-move-to-automation.html

If you aren't a Stage Directions subscriber, go and sign-up now. It's free, always a good read, and available as a digital or print edition.
Posted by Erich Friend at 6:50 PM No comments:

[Updated - 2014-03-31 - 12:50PM CDT]
February 8, 2012.  Following investigations into the stage canopy collapse at the Indiana State Fair on August 13th of last year, IOSHA has filed fines against the canopy provider Mid-America Sound Corporation, The IATSE Local 30 that provided labor to erect the stage, and the Indiana State Fair Commission, sponsors of the event.

The IOSHA order against Mid-America Sound claims that MAS knowingly allowed the stage to be erected without cross bracing and failed to provide adequate documentation for the erectors.  MAS said that they will challenge the findings and is already producing documents that they had previously withheld

UPDATE 2014-03-31:  Mid-America Sound has agreed to pay a $50,000 fine for safety violations and has also agreed to additional staff training and a new safety plan for future events..  Indiana’s Occupational Safety and Health Administration (IOSHA) orginally levied a fine of $63,000 against the company.

“On March 20, 2014, Mid-America Sound Corporation and the Department of Labor entered into an Agreed Entry resolving litigation that resulted from IOSHA's citations issued to Mid-America following the events of August 13, 2011 at the Indiana State Fair.  While Mid-America contested the appropriateness of the citations and made no admission of any wrongdoing by entering into the settlement, Mid-America believed that it was important to move forward in a cooperative effort with IOSHA and to avoid the costs and expenses of further litigation.”

Of particular concern was that IOSHA fined the Labor Union Local 30, which is not an employer, and claimed that they were acting as an employer of the stage hands that were injured and killed.  This charge is being vigorously disputed by the Union as they say they were only act as an agent to arrange labor resources.  However, unlike almost all other union offices, this local's officers actually operated a business entity that directly paid the laborers that were contracted to the Indiana State Fair.  If this charge is upheld, it will have a significant impact on the way this Local, and possibly others, is operated. 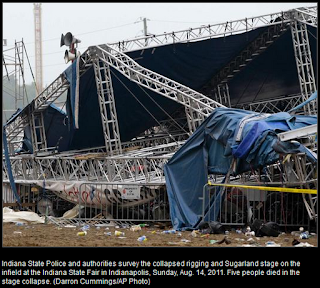 This is just the beginning of the legal process.  The report from the forensic engineering firm that is analyzing the failed structure has not yet been published, nor has any other official assessments of the event.  The IOSHA orders are only addressing one small segment of the incident:  The labor relationship between the Employers and the Workers with regard to their safety.  It is not IOSHA's place to address injuries to the general public or the over-all failure of the State Fair Commission that administered the event.  To date, there have been numerous law suits and over 100 tort claims filed that are seeking compensation for the damages and loss of life.

This blogger was told that Sugarland, the band that was to have played that night, had first right of refusal to not play (although they did not assert that right), and they did not have the right to override the State Fair Commission and demand to play.  Being willing to play is not the same thing as demanding to play.  This places the burden of responsibility back on the State Fair Commission for not cancelling the show and clearing the fairgrounds in a timely manner.  It's always a contentious position to be in when one state agency is penalizing another state agency.

Interviews with the Indiana State Police Troopers that were in the scene before the storm struck also said that they were fully expecting the Commissioners to cancel the show in light of the incoming weather front, and were dismayed when the announcer only said that the show would be delayed.  Had they known that the State Fair management team was not securing the site, they could, and probably would have overridden their decision and forced the issue for the sake of public safety.  Unfortunately, that announcement was made hours too late, and the brunt of the storm plowed through the area just moments later.

Sometime in the past week this blog passed a milestone of 100,000 views.  The hit counter is rolling regularly now, and I want to let the readers know that I really enjoy doing this.  It has been quite rewarding to read the comments and questions that are posed both publicly and privately.

Rig-Safe.net has announced that they will be hosting a free Truss Rigging Workshop at the upcoming PLASA Focus event in Austin, Texas.  In consideration of the coming summer festival season, this is a timely event to help prevent incidents like happened over the last few summers.

Where:
Stateside at the Paramount Theatre
719 Congress Avenue
Austin, Texas  78701
When:
Tuesday, February 21, 2012
10am to 5pm with a lunch break
Cost:
* FREE! *
Advance registration is required
Who:
Stagehands
Facility Managers
Educators
Students (minimum age 18)
Rig-Safe.net is a consortium of
James Thomas Engineering, Rigging Innovators, and Shur-Rig.
Posted by Erich Friend at 12:50 AM No comments: