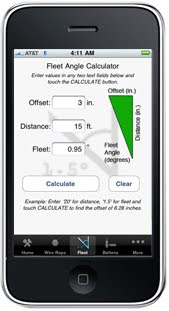 It's always good to have rigging information at your fingertips - it sure beats guessing or digging in your tool box for that chart of numbers. J. R. Clancy has turned its popular rigging slide rule tool into a free iPhone application. Installers and users of theatre stage rigging should find this handy. The new application delivers instant information in English and metric (SI) units.

The tool is free and currently available at Apple App Store.

More information about J. R. Clancy is available at www.jrclancy.com. As of this date there is no information available about the iRigging application on their web site.

Note: The app does not include iCommonSense, so you have to provide that yourself. It does feature standard GIGO* operation, though.

Have fun with it, just don’t be an iDiot and drop your iPhone from the iGrid – it might hit someone in the iHead. Has anyone released the iLanyard to keep this from happening?
Posted by Erich Friend at 1:51 PM No comments:

I've gotta get out of here! 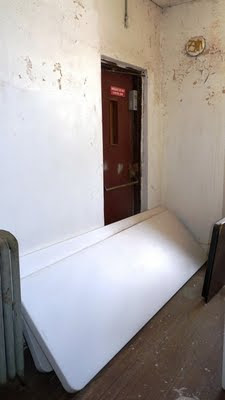 I frequently find tables in the aisles in theatres, and occasionally in exit vestibules, which are both clear violations of fire codes, but this one was particularly troublesome: 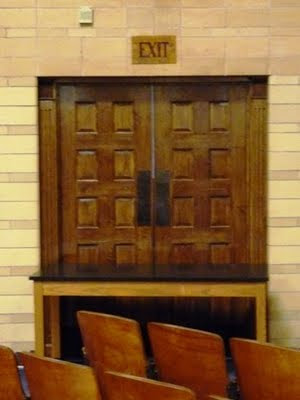 This was a laboratory table with a heavy top like a pool table, so it was not easy to move or toss aside. Even if you did move it, where would you put it that wasn't still blocking an exit aisle? Especially if there were people crowding toward the exit. On the other side of the door was the real surprise: 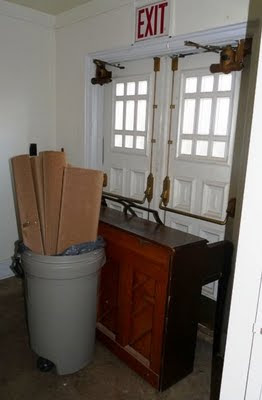 They had an upright piano cross-wise of the doors (and a trash can, too!). You would have to pull the piano away from the door, open the door, turn the piano and shove it out the door (assuming there was a crush of people behind you also wanting to get out.)

The amazing part of this is that I have found three pianos blocking fire exits in less than two months - and one of them was a grand piano! Billy Joel would not be happy! Not to mention the Fire Marshal!

Oh yeah, did you notice that the EXIT signs did not have functioning lamps?
Posted by Erich Friend at 9:29 AM No comments:

Police and fire officials say that about 2 p.m., Hollingsworth, 27, slipped as he stood on the catwalk, installing lights on a truss.

"He was not breathing when we arrived," police said spokesman Chase Scott.

Andy Hollingsworth was taken to St. Mary's Medical Center, where he died.

Both the Kravis Center and the Occupational Safety and Health Administration are investigating the incident.

The 16 catwalks in the Rinker's light truss are each eight feet long by 20 inches wide and there are several railings. A facility technical plan can be found at:
http://cache.trustedpartner.com/docs/library/000285/RinkerTech%20Spec%20Oct%201%202009.pdf

Hollingsworth had worked for the center since April 10, 2007. Shannon McShane Hollingsworth said she did worry about her husband's safety.

"He always promised, and told me, he was always careful. We always made sure he had new shoes with new rubber soles" she told reporters. It was unknown if he was wearing any fall protection equipment when he lost his footing and fell.

"We're vigorously investigating the cause of the accident," Kravis Center Chief Executive Judy Mitchell said. "As always, we're very concerned about the safety of our employees. Andy was a wonderful young man and a valued employee who will be greatly missed by the entire family of the Kravis Center."
Posted by Erich Friend at 4:49 PM 2 comments: