As we start the new year let's take a moment to look around our facilities with a fresh set of eye's.  It never ceases to amaze me at the number of obvious fire hazards I see when visiting theatres, gymatoriums, cafetoriums, and other assembly spaces.

It sometimes seems like we haven't learned anything since that fateful day in Chicago where over 600 people lost their lives.  These are the common fire code violations I frequently see that also fueled the Iroquois Theatre tragedy:
Learn not to burn.  Keep your Fire and Smoke Protective Systems working properly and accessible.

Here is a blog entry from Lori Green at Ingersol-Rand Security Technologies, the manufacturers of Von-Duprin Door hardware.  They make one of the few crash-bar exit systems that don't make a lot of noise - Great for Theatres!  http://idighardware.com/2010/12/iroquois-theater-fire/
Posted by Erich Friend at 11:15 AM No comments:

'Tis one of the the seasons for churches to attempt high profile productions, and a few schools, too.  If it involves flying people, angels, Santa Claus, Peter Pan, or anybody else, then it is REALLY DANGEROUS.  Hire professionals to do the work so that everybody makes it home for Christmas.  The November-December issue of Church Production magazine has a really great article about Hall Associates Flying Effects (http://www.flyingfx.com/) installing a computer-controlled system for three-dimensional flying of actors.  This article by Jim Kumorek discusses many important points about this type of very specialized rigging.  You can find it here:  http://www.churchproduction.com/go.php/article/on_a_wing_and_a_prayer_and_a_wire?p=1

Remember: Your frequent flier miles won't do you any good if you're being shipped in a box.
Posted by Erich Friend at 10:13 AM No comments:

December 20, 2010:  Actor / stunt double Christopher Tierney was said to be in serious condition with cracked ribs at Bellevue Hospital Center on Tuesday after falling about 18 to 30 feet (depending upon the report your read)  from a platform into a pit.  The accident happened during a Monday evening performance of SpiderMan: Turn Off The Dark at the Foxwoods Theater in Times Square, New York.

The production has also been plagued with other technical issues that has delayed it opening and, at $65 million and counting, is the most expensive Broadway show in history.  This was the fourth injury on the special-effects-laden show, and the most severe.  Earlier, two stuntmen / dancers had injured themselves in a “slingshot” type stunt, one breaking both his wrists, and another suffering a foot injury.  During the first preview performance of the show an actress suffered a concussion when she was struck in the head with a rope.

The incident occurred near the end of the show when the bridge set piece comes down and MJ (Mary Jane) is lowered on a rope from the edge of the bridge into a pit that is out of sight from the audience's view.  As she decends on a rope, he was to lean over the edge and look down followed by a black-out.  Unfortunately, the fall restraint lanyard failed and the performer lunged over over the side of the elevated platform.  Soon after the audience saw SpiderMan take the unexpected plunge, the stage manager's voice was heard over the PA, and informed the audience that there was going to be a pause in the show.  The theatre stayed dark for a minute or two, and then they called the show and brought the house lights back up.
﻿
﻿Coming from the pit where the actor fell, a voice, which was believed to be lead actress Jennifer Damiano's, was heard screaming.  As audience members left the theatre, at least one ambulance and fire truck were seen.

Actors' Equity Association, the labor union representing American actors and stage managers in the theatre, released its third statement December 21 that stated:  "Actors' Equity Association worked today with the Department of Labor, OSHA and the production to determine that the cause of the accident at last night's performance of Spiderman was, in fact, human error.  Further protocols are now being implemented, including redundancies recommended by Equity, the DOL and OSHA, to address this situation as well as other elements of the production.  [Actors'] Equity [Association] continues to vigilantly monitor the production for the safety of its members."

State lawmakers and safety advocates met with crew and cast members of the troubled Broadway musical "Spider-Man: Turn Off the Dark," which will resume its performances Thursday night.
The meeting addressed the need for better theater oversight following the hospitalization of an actor who fell during a recent performance.  "This is a workplace and they are entitled to a safe workplace," said New York Assemblyman Rory Lancman, who chairs a state subcommittee on workplace safety. "Clearly there were shortcomings."  "While we appreciate that 'Spider-Man' is pushing the envelope . . . workplace safety is not something that can be achieved by trial and error."  Lancman said earlier that the show could proceed if it met advisory recommendations.

Lancman said those concerns include providing sufficient rehearsal for understudies performing aerial or tethered sequences. All performers involved in aerial work must also attend seminars or those sequences may be removed from the show, according to a written statement.  There must also be sufficient crew and stage management to run the show safely, Lancman added.  Also, the tether attached to the Spider-Man double will be shortened so the actor is not as close to the end of the platform.

The company canceled its Wednesday matinee and evening performances to review the new safety measures recommended by the Occupational Safety and Health Administration and the New York State Department of Labor, said company spokesman Rick Miramontez.

State Sen. Eric Adams told reporters Thursday that he is introducing a bill that would create a task force charged with examining safety regulations in New York theaters.

OSHA began its investigation of the incidents that took place at the Foxwoods Theater, located at 214 West 43rd St. in Manhattan, after receiving a referral from the New York State Department of Labor. The incidents resulting in employee injury happened on Sept. 25, Oct. 19, Nov. 28 and Dec. 20, 2010.
From the investigation, OSHA alleges that employees were exposed to the hazards of falls or being struck during flying routines because of improperly adjusted or unsecured safety harnesses. An additional fall hazard stemmed from unguarded open-side floors that lacked fall protection. Finally, the company failed to shield employees from being struck by moving overhead rigging components.
These conditions resulted in the issuance of the three serious citations, with a total of $12,600 in proposed fines. OSHA issues a serious citation when there is substantial probability that death or serious physical harm could result from a hazard about which the employer knew or should have known.

The employer, 8 Legged Productions LLC, has 15 business days from receipt of its citations and proposed penalties to meet with the OSHA area director or contest the findings before the independent Occupational Safety and Health Review Commission. The inspection was conducted by OSHA's Manhattan Area Office; telephone 212-620-3200. To report workplace incidents, fatalities or situations posing imminent danger to workers, call OSHA's toll-free hotline at 800-321-OSHA (6742).

Under the Occupational Safety and Health Act of 1970, employers are responsible for providing safe and healthful workplaces for their employees. OSHA's role is to ensure these conditions for America's working men and women by setting and enforcing standards, and providing training, education and assistance. For more information, visit http://www.osha.gov/.
Posted by Erich Friend at 8:45 AM No comments: 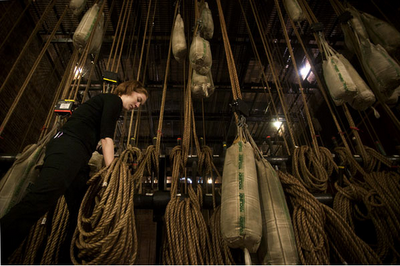 Dawn Wilfong, 24, works the fly rail and hauls a piece of coiled rope during a performance of “A Christmas Carol.”  (c) 2010 Photo by Thomas Slusser (For The Virginian-Pilot)

Check out this great story about one of the few remaining active rope rigging houses.  http://hamptonroads.com/2010/12/behind-scenes-wells-theatre-rare-find This wooden pin-rail is in a theatre built in Texas in the 1920's.
﻿One of the most common scenarios this blogger sees is equipment like this that has never been serviced in 50-70+ years.  The Loft Blocks are sometimes made of dry-rotted wood or sand-cast pigiron, either of which could fail under load without notice.  The ropes need constant review and regular replacement, too, as they weaken with age and abrasion.  As you can see in the second picture, the facility operators in this building don't understand the concept of counterweighting the batten loads, so everything is stage-heavy.  The battens are dead-hauled (bull-dogged) up, and if the tie-off fails or the fly crew looses their grip, then the batten and load will will come crashing to the stage.
Other potential problems are retro-fitted belaying pins:   I've found rebar, conduit, gas pipe, broom handles, steel spikes, and other odd items used in place of the correct items.  Some hemp-house facilities are 'hand-me-down' theatres that started-out as the High School Auditorium, then was the Middle School, and is now part of the Elementary School facility.  Not only is the equipment MORE DANGEROUS, but it is located where young children not familiar with the hazard potential can pull-out the belaying pins and/or untie the rope lines. 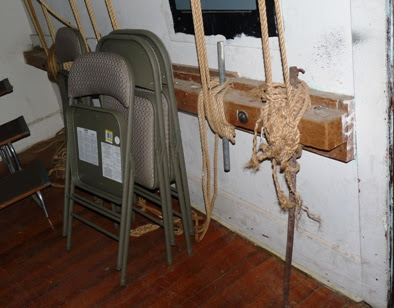 It is extremely important that the operators and staff fully understand how the fly system works and what safety precautions must be taken when loading and operating the system.
Posted by Erich Friend at 8:17 AM No comments: 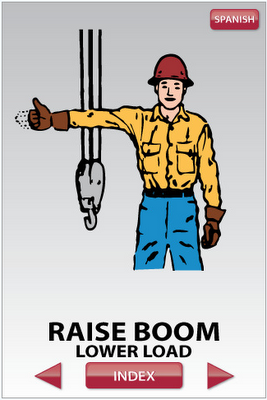 Every signal included is compliant with the new OSHA Cranes and Derricks Standard, Appendix A to Subpart CC of Part 1926-Standard Hand Signals. Each signal is shown graphically so that operators can quickly and easily reference the appropriate signal for each command. All signals are available in English and Spanish.

This new app is intended for use before entering the workplace. SC&RA does not encourage the use of smartphones on jobsites.  The Specialized Carriers & Rigging Association (SC&RA) is an international trade association of more than 1,300 members from 43 nations. Members are involved in specialized transportation, machinery moving and erecting, industrial maintenance, millwrighting, crane and rigging operations, manufacturing and rental.

The final rule was published on August 9, 2010 by the Federal Register and became effective 90 days later.  The rule can be found at http://www.osha.gov/FedReg_osha_pdf/FED20100809.pdf.

A copy of the regulatory text is available at: http://www.osha.gov/doc/cranesreg.pdf
Posted by Erich Friend at 10:53 AM 1 comment: