The following report is excerpted from an article in by Associated Press writer JULIANA BARBASSA Original content here:  http://news.yahoo.com/no-alarm-only-1-exit-brazil-nightclub-fire-002812171.html

SANTA MARIA, Brazil (AP) — The nightclub Kiss was hot, steamy from the press of beer-fueled bodies dancing close. The Brazilian country band on stage was whipping the young crowd into a frenzy, launching into another fast-paced, accordion-driven tune and lighting flares that spewed silver sparks into the air.

It was another Saturday night in Santa Maria, a university town of about 260,000 on Brazil's southernmost tip.

Then, in the pre-dawn hours of Sunday morning, January 27th, it turned into a scene of indescribable horror as sparks lit a fire in the soundproofing material above the stage, churning out black, toxic smoke as flames raced through the former beer warehouse, killing 233 people. 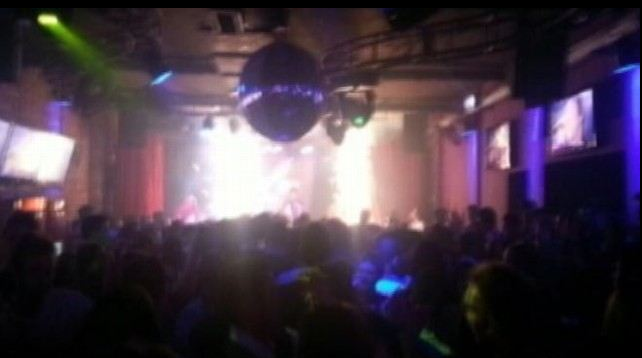 "I was right there, so even though I was far from the door, at least I realized something was wrong," said Rodrigo Rizzi, a first-year nursing student who was next to the stage when the fire broke out and watched the tragedy unfold, horror-stricken and helpless.

"Others, who couldn't see the stage, never had a chance. They never saw it coming."

A security guard said afterward that the club was at its estimated maximum capacity of between 1,000 and 2,000 people.

There was no fire alarm, no sprinklers, no fire escape. In violation of state safety codes, fire extinguishers were not spaced every 1,500 square feet, and there was only one exit.

As the city buried its young Monday, questions were raised about whether Brazil is up to the task of ensuring the safety in venues for the World Cup next year, and the Olympics in 2016. Four people were arrested for questioning, including two band members and the nightclub's co-owner.

Rizzi hadn't even planned on going out that night. He was talked into it by friends and knew dozens at the club. He said the first sign of a problem was insulation dripping above the stage.

The show kept going. Then, as the ceiling continued to ooze hot molten foam, dos Santos grabbed the drummer's water bottle and aimed it at the fire. That didn't work either, Rizzi said. A security guard handed the band leader a fire extinguisher. He aimed, but nothing came out; the extinguisher didn't work.

At that point, Rizzi said, the singer motioned to the band to get out. Rizzi calmly made his way to the door — the club's only exit — still thinking it was a small fire that would quickly be controlled.

The cavernous building was divided into several sections, including a pub and a VIP lounge — and hundreds of the college students and teenagers crammed in couldn't see the stage. They continued to drink and dance, unaware of the danger spreading above them.

Then, the place became an inferno.

The band members who headed straight for the door lived. One, Danilo Brauner, went back to get his accordion, and never made it out.

The air turned dense and dark with smoke; there was no light, nothing pointing to the single exit. Rizzi found himself clawing through a panicked crowd that surged blindly toward the door.

"I was halfway across the floor, I could see the door, but the air turned black with this thick smoke," he said. "I couldn't breathe. People started to panic and run toward the door. They were falling, screaming, pulling at each other."

The manager, meanwhile, was outside dealing with a drunk and belligerent young man. No one there had any inkling of the desperate scene unfolding just beyond Kiss' black, sound-proof double doors, said taxi driver Edson Schifelbain, who was in his car, waiting for passengers.

A security guard poked his head out and said there was a fight. A fraction of a second later, someone inside yelled "Fire!" The manager opened the doors and it was like opening the gates of hell, Schifelbain said.

Young men and women, mouths and eyes blackened with soot, clothes tattered, tumbled out screaming and crying. Some ran right over his taxi and two other cabs parked nearby, breaking mirrors, windshields, bashing in the doors. Horrified, he realized his cab was in their way, but couldn't move it because there were bodies hunched over it, collapsed in front of the tires, everywhere.

"The horror I saw in their faces, the terror, I'll never forget," he said. Two girls gasping for air climbed into his car, and as soon as he was able, he sped the six miles (10 kilometers) to the university hospital.

"One of them was crying all the way, screaming, 'My friend is dying,'" he said. "I did what I could. I don't know what happened to those girls."

Inside the club, metal barriers meant to organize the lines of people entering and leaving became traps, corralling desperate patrons within yards of the exit. Bodies piled up against the grates, smothered and broken by the crushing mob.

Rizzi was stuck, unable to move, taking in gulps of smoke, feeling the gaseous mix burn his lungs.

He was within seconds of passing out, he said, when the whole frenzied mass suddenly lurched forward. The gates gave way, and everyone toppled over. Rizzi was lying on top of two or three people, several more heaped on top of him. He stuck out his hands, smacking them against the sidewalk and door.

Someone pulled him to safety. "To get out, I climbed, I pulled people's hair. I felt other people grabbing me, hitting me in the face," he said. "It's hard to describe the horror. But once I was outside, I recovered, and started pulling out the others."

Soon, he said, the street was a sea of bodies.

This was the scene 24-year-old Gabriel Barcellos Disconzi found when he arrived about 3:30 a.m., an hour after fire broke out. Wakened by a phone call from friends, the club regular immediately started pulling out bodies as smoke spewed so thick that entering the building was unthinkable.

Using sledgehammers and picks and their bare hands, he and other young men broke down the walls. Born and bred in Santa Maria, the outgoing young lawyer had dozens of friends and acquaintances inside.

Both Rizzi and Disconzi were there when they broke into one of the bathrooms and found a tableau of nearly indescribable desperation: It was crammed with bodies, tangled and tossed like dolls, piled as high as Rizzi's chest. In the darkness and confusion, concert-goers had rushed into the bathroom thinking it was an exit. They died, crushed and airless in the dark.

"I'll never forget the wall of people," Rizzi said. Disconzi helped load them into a truck. Just the dead jammed into that bathroom filled an entire truck, he said.

By this time, the city was waking up to the dimension of the tragedy unfolding at its heart. Doctors, nurses and psychologists began arriving, giving immediate assistance — checking eyes and respiratory passages, stabilizing the burned, resuscitating those whose hearts had stopped or lungs had failed because of the smoke. The living they loaded into ambulances. The mounting number of dead went into trucks.

At Charity Hospital, the region's largest, "It was a war scene," said Dr. Ronald Bossemeyer, the technical director. "Trying to give care, comfort the living, and keep family members who started to arrive from overwhelming everything — it was madness," he said, choking back tears. "The wounded, the doctors, people running with saline, with oxygen. We've never seen so many patients."

As families waited, nurses and technicians ran back and forth, bringing an earring, a shoe, a wallet, anything that could help identify those still living, Bossemeyer said.

As doctors were at work saving those who could be saved, a group of mothers was calling around to check on one another. Elaine Marques Goncalves woke up to that terrible question: Do you know where your child is?

With a jolt, she realized two of her sons, Gustavo and Deivis, had not come home the night before. "I knew they'd gone to a club, but I didn't know which one," she said. Trying to keep calm, she joined the multitude pressing for news outside the hospital.

Hours later, she got some good news: Gustavo had burns on 20 percent of his body and had suffered two heart attacks as his lungs failed to draw oxygen, but he was alive and being flown to the state capital, Porto Alegre, for treatment.

"I had time to put my hands on him and say, 'My dear, your mother is here with you,'" she said. "He was sedated, but I know he could hear. Then I had to tear myself away and go find my other son."

Hours passed as the dead piled up in the city gym. It took an entire day of anguish before she learned what she'd dreaded most: Deivis was dead.

As he lay there among basketball hoops and water coolers, one body among so many, she asked the questions on everyone's mind.

"How can a club just burn like that? People have to know what happened here," she said. "It won't bring back my son, but I have to ask. This nightclub was beyond capacity. The whole world has to know. Why couldn't they get out?"


*********************
Police were questioning the club's owner and interviewing witnesses as part of an investigation into what caused the blaze, state-run Agencia Brasil reported.

The club's license had expired in August and had not been renewed, local fire official Moises da Silva Fuchs told Globo TV.

Reinaldo Azevedo, writing on the Veja news website, asked why the fire department had previously approved a venue with only one exit. "Our grief must also exercise wrath," he wrote. "This is not a tragedy manufactured by chance. It is the work of a chain of negligence."

Ongoing updates about this event can be found at:
http://en.wikipedia.org/wiki/Santa_Maria_nightclub_fire

A 2003 nightclub fire killed 100 people in Rhode Island at The Station Nightclub after the rock band Great White illegally used pyrotechnics that ignited combustible foam soundproofing that lined the walls and ceilings of the venue.


Another celebration where fireworks ignited ceiling décor occurred in Buenos Aires, Argentina's República Cromagnon nightclub in 2004; the death toll there was 194.

A 2009 fire at the Lame Horse nightclub in Perm, Russia, was caused by fireworks igniting plastic decorations on the ceiling; 152 died as a result.