2013-07-16 - Moscow, Russia - A 40 year veteran of the Bolshoi Theatre died Wednesday at a Moscow hospital as a result of injuries sustained from a fall into the machinery pit of the Orchestra Lift.  Violinist Viktor Sedov, 65, was found lying on the pit floor about 2:30PM Tuesday when a theatre employee making a routine fire safety round found Sedov lying unconscious on the pit's concrete floor.  He was taken to the Sklifosovsky Hospital where he passed away the following day.

The accident happened in the New Stage venue, one of four venues in the Bolshoi Theatre of Russia complex.  The Main Stage venue had recently gone through significant architectural modifications, and it is suspected that Sedov entered the unlit sub-stage entry platform behind the orchestra lift and stepped out in the darkness to where he believed the Orchestra Lift Platform was positioned.  In the old configuration of the facility the platform was at the same level as the bottom of the pit.  The lift platform was up at a higher level and he plummeted into the machinery pit.  One report says the fall was about 6 meters (19 feet), but this may be the total depth from the stage, and not the depth from the sub-stage entry platform, however, another news report says that he fell from the stage level. Part of the facility reconstruction involved the addition of many levels of subterranean storage and workspaces, so it may be that the Orchestra Lift pit did extend down 6 meters from the substage platform.

On Wednesday, the Bolshoi's press secretary, Katerina Novikova, said the cause of Sedov's death will be determined by a special commission.  A decision regarding further legal action will be made depending on the outcome of the police inquiry into the incident.

In this accident, there are several causal factors to consider:
We can learn from other industries' Best Practices and incorporate those procedures into our daily regimen.  In the sport of SCUBA diving they use the Buddy System - participants NEVER dive by themselves - there is always someone with you nearby that can you rely upon to help you if you need it.  Theatre facilities should have a similar policy.  There are 1000's of scenarios where a single person in a theatre can be injured and not be able to call for help.  If you have a co-worker with you the odds of both person's being incapacitated are significantly reduced.  Simply put:  Don't go into the theatre by yourself! 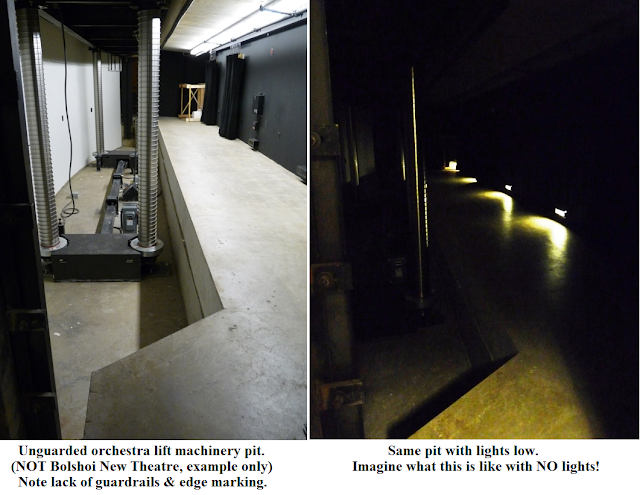